Marriage has been held for centuries with some ceremonies. Turkey has traditional ceremonies also shows differences from city to city.

Marriage has been held for centuries with some ceremonies. Turkey has traditional ceremonies also shows differences from city to city.

It all starts with the meeting of families of couples who want to get married.

This meeting starts with the groom’s family going to the bride-to-be’s home with flowers and chocolate. Families meet and intention is said. Meanwhile, Turkish coffee begins.

In ancient times, Turkish coffee was an intermediary that conveyed the message. If the girl’s family does not approve of this marriage; Turkish coffee served by the bride candidate spicy to the groom. The groom returns the cup after taking a sip, and the family members leave home, realizing that they are not wanted when they see this situation.

Of course, this situation has changed today.

Although Turkish coffee is not a message object, it keeps its importance and continues to be served to guests. But the groom’s coffee again a bit spicy. The groom drinks the bitter, spicy coffee till all finished. With this, the groom gives the message that “I will always love your daughter in good day and bad day.”

“We ask for your permission for the marriage of your daughter and our son with the advice of our Prophet and the order of Allah.”

The father of the bride-to-be or a family eldest “The youngsters see each other and like each other, wish good luck to them for their future and hope the best for them.” he stands up. Everyone shakes.

A single girl brings the rings tied together with a red ribbon on a tray. The person identified between the two families wears these rings on the finger of the young couple and gives a talk about the importance of marriage. When the speech is over, he cuts the ribbon. Here he receives the tip of the groom saying “he does not cut the ribbon”. The groom gives the tip to the single girl who brings the rings.

Desserts brought by the groom’s family are served. There is also a message while baking baklava, Turkish delight or chocolate flavours. This is the message of the life of the young couple and the family to always be so sweet, cheerful and peaceful.

The second meeting ritual is of course not the last meeting before marriage. The families then meet and talk about everything to do about the wedding. Wedding date, what kind of rituals will be performed, these vary completely according to the financial situation and traditions of the families.

Gold jewelry is given to the bride in relation to the financial situation of the families.

Dowry; are the gifts given to the bride by her family. Bride makes a comfortable start to her new life with this financial support of her family for her new home.

In some cities, the dowry of the bride is exhibited before the wedding. The purpose of showing these dowry; to ensure that the relatives of the bride see the shortcomings of the bride’s house and determine the gifts they will receive.

There are kitchenware, carpets, curtains, bedroom items and dowry chests in the dowry. The dowry chest is a box made of wood where special items belonging to the bride are placed. While the dowry is taken to the groom’s house, a small child of the family is placed on this chest. Money is asked from the groom to get up over the chest. The groom also gives money according to his economic situation. While the wedding invitations are being distributed, in some regions, the bride and groom give gifts to mutual family elders. These gifts are gifts that vary locally, such as towels, shirts, dresses, slippers.

Henna night is a farewell ceremony with the family of the girl to get married. Villages and towns go to the bride’s house with drums and flutes. A restaurant or wedding hall is rented in the cities. The groom’s close friend also has duties. This person is called “saddler”. The groom’s family gives the Turkish flag to this closest friend. A red ribbon is tied to the arm of this best friend, and if there is any need during the wedding, it is spoken to. Thus, the couple does not have to solve problems during the wedding. Sadıç is almost a coordinator.

The door of the bride’s house is locked. The person who hides the key to open it with tip from the groom. Sadıç ties the flag to the roof of the house or the balcony. Red tulle is attached to the bride’s hair. Green tulle is wrapped around the neck of the groom. The bride is dressed in a red local dress or a beautiful dress. The groom’s family brings nuts, desserts, sherbets to distribute to the guests. The girl’s side also offers treats.

Henna is prepared by single girls. During this preparation, prayers and manias are read. Henna is put on the tray, candles are burned.

The bride’s friends are sang with henna songs and accompanied by her friends. When the bride sits on the chair, her face is covered with a red tulle. If he does not want to keep henna on his hand, the groom’s family puts a gold in the bride’s hand. Like the henna songs, the crying of the bride is a tradition. Guests are served meals and drinks.

Henna is also made in groom’s hands.

In the henna night, local entertainment shows differences. The groom’s friends make many jokes to the groom. They can hide the groom’s belongings (shoes, jacket, …). Sadiç (the close friend of groom) has to do what the person hiding the item wants. The duty of Sadic is to take care of the groom. Young people perform folk dances and sing manias.

During the official cerenomy, the bride steps on the groom’s feet. This means that the promise of the bride should pass at home.

Everyone joins the fun at the wedding. Food and beverage served. The couple’s family, relatives and friends give gifts. This ceremony is called jewelry ceremony. These are usually gold and money. The aim is to support the financial difficulties they will encounter in the pair that will establish a new home.

Sadiç brings the bride and groom home. Female relatives of the groom, who came home before them, throw abundance symbol items such as rice, bulgur, money, from the bride’s head. The bride is also given items such as cups, pottery and plates to break it. The breaking of this is that the bad luck will break and disappear. The groom and the bride enter the house with applause by praying with the right foot.

Although weddings generally seem costly for the male side, life is common. Everything is common after marriage. As the shares increase, they increase in happiness. 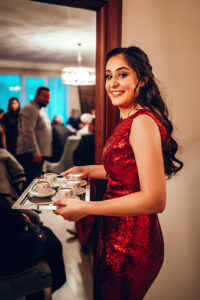 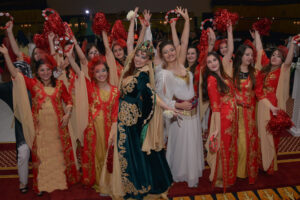