Today, we offer you a great perseverance and success story. An example from Turkey that it will achieve what you want after the successful person … Let’s have a look Betül Mardin’s life who is the one of most important female figure of the modern Turkey.

She was born in Şişli, Istanbul in 1927. She did not speak until the age of four. As she began to speak by stuttering, there was a damage to her brain as a result of beatings from her nanny. She was very upset that people made fun of her. She made a promise to herself for struggle with perseverance and managed to correct her speech.

When her older sister got sick and died, her father did not support her going to university. But she wanted to produce, to be a useful person. She made efforts to improve herself by going to courses such as cooking and tailoring. Having good command of English and French gave him an advantage.

In 1952, she started working in the magazine section of Tercüman newspaper. After working there for three years, she started working in Yeni Sabah newspaper. She got married twice and left. She had a daughter from the first marriage had a son from the second marriage. The second husband is the world famous Haldun Dormen. She started to work in TRT and went to London with the desire to improve herself and took a course at the BBC.

She started in 1968 as a Public Relations Specialist under the name “Human Relations”. She gave lectures at Istanbul University, Boğaziçi University, Istanbul Bilgi University.

In 1995, she became the head of the International Public Relations Association. She was given the title “Member Emeritus” in 1997. Betul Mardin in Turkey, emphasizing the importance of Public Relations and is the first person who opens a big breakthrough in this field. She is a woman with working principles. She had three S rules. She has never been found in politics, cigarettes and weapons.

Betül Mardin, a struggling Turkish woman who never ceases to work and produce, has been an example to young people and continues to be. 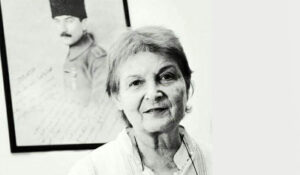