First of all, we would like to present some information about the education and career of Türkan Saylan. Then we want to share with you the main reason for the respect he received.

We want to indroduce you Türkan Saylan who has shown struggle and great effort about education and health topics and one of the most important female figüre in modern Turkey.

As you witness the life of Türkan Saylan, who has achieved countless successes both in the domestic and international arena, you will feel the same respect for her.

In this way, her works that will make a sound in the world about leprosy have gained momentum and started to be appreciated.

Türkan Saylan started her leprosy work in 1976, known as leprosy, and established the War Against Leprosy Association and Foundation. She received the “International Gandhi Award” in India in 1986. Saylan, who served as a consultant to the World Health Organization on leprosy until 2006, was also a founding member and vice president of the International Lepra Union (ILU).

Of course, there was another reason for Türkan Saylan’s throne in the hearts. She devoted her life and savings to the girls’ reading through the foundation she founded.

The national project given to the education of girls who want to receive the education that they call “Kardelenler” (Snowdrops) most, but whose family is not enough, has made a great noise. to create a public opinion in Turkey with the support of many artists, the project has succeeded. Her sensitivity is still remembered with great appreciation. The girls who supported by her remember Türkan Saylan with a big respect.

Türkan Saylan also has many national and international awards in the field. Lets have a look to them.

Education Award TED College (for her contributions to education)

The Most Hearted Woman of the Year Award (2004) 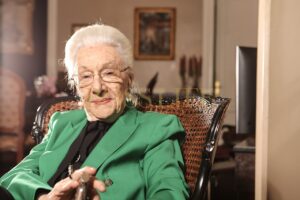 Betül Mardin: The Story of Never Giving Up